Posted on July 31, 2014 by noruegaenargentina 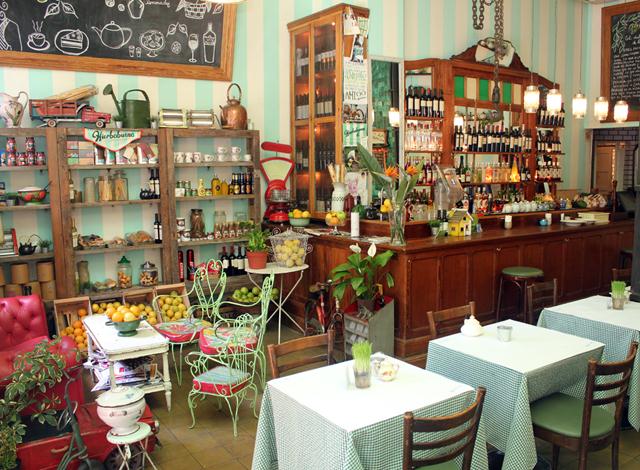 Today I tried a new-to-me restaurant in San Telmo, Hierbabuena. I had read good things about it as an almost-vegetarian, and very vegan-friendly, restaurant, and decided to try it out with some vegetarian friends. In the end, it was a somewhat mixed experience. The place is adorable, they have done a great job with the decorations and it feels cozy and inviting. I was also impressed with their flexibility in letting us order from the dinner menu even though it was before 20:30 – other places might have said no. But all in all I wasn’t thrilled with Hierbabunea. The bread they put out was delicious – whole grain bread with a really nice spread – but our waitress was very, very clumsy! As soon as I sat down she broke a glass basically on me, with glass shattering everywhere. We saw her drop other things through the evening! Also, the order of service wasn’t very good: We ordered drinks, and some of them were very much aperitivi, but she brought out the soup right away anyway – I would have enjoyed my Aperol spritz more on its own than together with the soup. (A small bowl of butternut squash soup was included – good but nothing extraordinary.)

For my main course, I had ordered a falafel salad. The salad had WAY too much oil, and the falafel wasn’t crunchy at all; it felt like balls of mashed potatoes. I can understand not wanting to fry them, but they could at least have baked them until crunchy? My friends both had the mushroom burger – the burger itself was good but it didn’t have a bun and while the potatoes were delicious, there was only half of a small potato…

As I said, the place was very cute and inviting, and the menu looked great. But all in all it was way too expensive for what it was. For instance, they had a 28 peso service charge, which seemed crazy at a place like that. 96 pesos for a salad was also way too much… We discussed leaving after seeing the menu, but decided to give it a try – in the end I wish we hadn’t.

This entry was posted in Buenos Aires, Personal, Restaurants, Veggies. Bookmark the permalink.